While students have been busy adjusting to their internships and continuing classes, the Student Life Office at FIE had arranged some London-based activities that provide us with insight into British life.  First on the schedule was an English football game.  As I have learned while living here, football is as much a part of British culture as tea or the Queen.  As the former footballer and famous Liverpool manager Bill Shankly once said, “Some people believe football is a matter of life and death. I’m very disappointed with that attitude. I can assure you it is much, much more important than that.”  I come from a football-oriented family with a mother who coached at the high school level and a father who played in South America.  I didn’t wait for FIE to introduce me to Premier League football though.  Arsenal quickly became my favorite club and I have been lucky enough to attend four games at the Emirates Stadium with one of my flat mates.  I have been amazed at the passionate fan base and the professional abilities seen on the pitch.

I had every intention of attending the football match between Fulham and Sheffield Wednesday with the other FIE students.  But when the opportunity presented itself to see the England National Rugby Team play Fiji on the same day I gave away my football tickets to see my first professional rugby match. It was a great decision because England has gone on to finish the season undefeated.  I’m so happy I got to witness the national team.

Another first for me was NFL football.  Of course, I am referring to American football and the national football league.  Each year several NFL teams travel to London to play at Wembley Stadium and when my cousins from Jacksonville, Florida found out we were going to be in London at the same time, they got me a ticket to join them for the Jacksonville Jaguars versus Indianapolis Colts game.  I never expected to have to go to London to experience the NFL but it was a great experience for me.

The next activity FIE organised was traditional British afternoon tea.  We met at the Park Terrace Restaurant at the Royal Garden Hotel and enjoyed a very sophisticated and civilised event.  Traditional formal tea typically begins with a selection of teas served in a teapot at your table and followed by a variety of courses.  The food service usually begins with a variety of savoury finger sandwiches.  There was cucumber, egg mayonnaise, smoked salmon with cream cheese and ham all served on soft bread with crusts removed.  The savoury course was followed by a variety of scones served with marmalade and clotted cream.  This was followed by a selection of beautifully decorated cakes and pastries that were elegant and artfully designed.  I met FIE students that afternoon that I hadn’t previously met and enjoyed their company in the most traditional event of English society.

Finally, no visit to London is complete without an evening or matinee at a West End theatrical performance.  Affordable tickets are usually available through a variety of sources and I encourage you to explore the theatre if you enjoy musicals and drama.  I have been lucky enough to see amazing stage performances of Phantom of the Opera, Willy Wonka and the Chocolate Factory, Les Miserables, Book of Mormon and the FIE sponsored visit to see Wicked.  This musical, at the Apollo Victoria Theatre, has been playing for ten years and presents the untold story of the witches of Oz.  Without giving too much away, I will say that you leave the theatre feeling quite differently about the Wicked Witch of the West and there are very real lessons about bullying, discrimination, and acceptance of those different from ourselves. 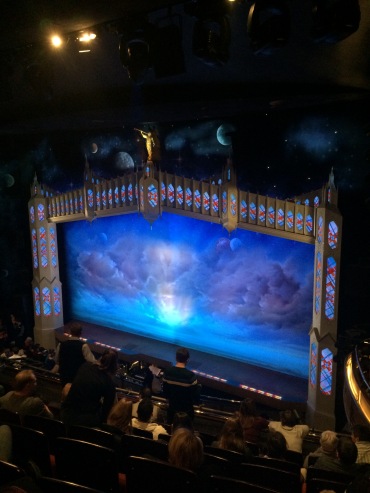 I appreciate the effort FIE has put into providing a variety of activities that present students with a slice of British life and the opportunities I have been provided while here.

Until next time,
Lizette