On my last travel weekend before final exams begin and papers are due, I planned a visit to Rome with one of my flat mates.  So far I have traveled in England and Wales and visited Munich, Paris and Amsterdam.  My scholarship to study with FIE was granted based on an essay I wrote about religious diversity.  Since I have been here, I have explored mosques and temples, great cathedrals and local churches.  In choosing Rome and the Vatican as my last destination, I am making a pilgrimage to the center of my own religion, Roman Catholicism.  It’s my way of offering personal thanks for my safety and the opportunity of an exceptional academic experience. 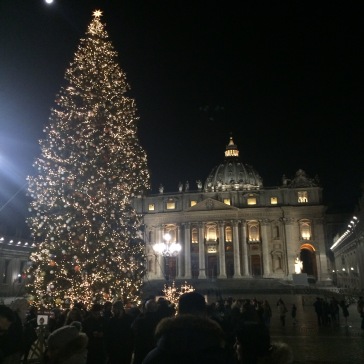 We departed Gatwick Airport on a 2.5-hour flight to Rome’s Leonardo da Vinci Airport where we picked up ground transportation into the ancient city.  Arriving late at night, we went straight to our Airbnb to check-in.  Luckily restaurants in Rome stay open very late so once we dropped off our bags, we walked to a nearby restaurant for a relaxing evening meal.  Then it was back to our accommodations to prepare for a full Saturday of exploring the city.

Having experienced the advantages of booking ahead, we arrived within the walls of Vatican City, a city-state fully contained within the city of Rome, and began our tour of the Vatican Museums and the Sistine Chapel.  Being in this holy place during the Advent and Christmas season was a special and moving experience.  The priceless works of art, the sheer size of St. Peter’s Basilica and the surprising intimacy of the chapel left me speechless.  The crowds were immense, yet respectful as we made our way through the very foundation of the world’s largest religion.

Inside the Vatican, we decided to stop for lunch at a cafe and sit outside in the sun to people watch.  I have discovered that you can learn a great deal about a culture by watching its people go by.  In Rome, as in Paris, it is a mix of tourists and locals and perhaps no place in the world is more fashionable.

After the Vatican, we had some time to explore more of Rome so we headed to the Pantheon, an ancient Roman temple that is now a church and regarded as the best-preserved building of ancient Rome.  Just by walking around, it is possible to take in the architectural sights that include fountains, statues, and historic buildings and of course, churches.  There are over 900 churches in Rome and most are Roman Catholic.  The Tiber River flows through Rome and with it are wonderful old bridges that add to the spectacular scenery.

Of course, no visit would be complete without a visit to the Trevi Fountain.  By tossing a coin into the water, legend says you will return to the eternal city, so named because ancient Romans believed that no matter what happened in the world and how many empires fell, Rome would live forever.

Then we decided to make our way to the Spanish Steps for the ultimate destination in people watching.  The Roman Baroque style of the Scalina Spagna connects the lower Piazza di Spagna, once the home to the Spanish Embassy to the Holy See, with the Triniti dei Monti and its twin church spires.  The design of the steps, a mix of curves, straight flights, and terraces with striking vistas has drawn people for almost three hundred years.  It has always been a popular place for artists, painters and poets who found it’s setting inspirational.  In turn, the artists’ presence has attracted beautiful women aspiring to become models and their presence has attracted rich Romans and travelers.  And now, the steps are crowded with people from all kinds of backgrounds.  So the tradition of the Spanish Steps as a meeting place continues.  After a full day of sightseeing we chose to relax the Roman way, with dinner in one of the open piazzas that was beautifully decorated for the holiday season.

The next day was spent in a most contrasting location, the Roman Colosseum.  Located in the very heart of Rome and known as the Flavian Amphitheatre, it is the largest ever built, and opened in 80AD.  To further the contrast from our holy visit the day before, the Colosseum honored Roman gods with various statues and was known as a location of sport and blood lust for gladiator battles that pitted Christian slaves against each other or wild and exotic animals, fighting to the death.  There were parades, executions, acrobats, music, and dancing all staged for the entertainment of wealthy Romans.  Today of course, this is an iconic reminder of the past and has survived fire, earthquake and dismantlement for its stonework to remain as an architectural and engineering marvel.  We rounded out our trip with a stop at the Forum and Palatine Hill.  This former outdoor market became the center of ancient Roman government and today is a carefully excavated site of those ruins.

A quick bus ride to the train station and a flight out of Rome had us back in London and ready for our final week with FIE.

Until next time,
Lizette