One of the biggest mistakes you can make while studying abroad in London is neglecting the wonderful country you are in! With flights out of the country being so cheap, it’s easy to get carried away and book numerous trips. And while that is a great option (I have my fair share of trips planned off the island), there is so much in the UK that students forget about. The train and bus systems in the UK are amazing! Almost any place you want to go to in the UK is accessible by these methods. I really suggest looking into a Britrail Pass for longer trips because it provides great bang for your buck (it has been so helpful for me). On top of that, the UK is a really safe place to travel, so it is a worry free destination. I also suggest using the Youth Hostel Association (England) and Hostelling Scotland as a starting place. They have great accommodations around the island that are very good quality for such a cheap price as well as trip ideas. I really urge you to look outside of the mainstream places to go visit. There are so many cute villages that really help you get an authentic British, Scottish, Welsh, or Northern Irish experience.

England is broken up into 48 different counties. Each one has a unique history, dialect, traditional food, and way of life. I visited Cornwall a few weeks ago with my friend and was introduced to the Cornish pasty (pronounced pah-sty), a meat pie with potatoes, gravy, and vegetables (however, there are many variations). They were originally made for miners so they could eat lunch without getting their food dirty since their hands were covered in coal dust. The crust was originally used just to hold the pasty. Cornwall is one of the poorest counties in the UK, however, tourism there is quite popular due to the beautiful farmland and sea views. We took an overnight bus to Helston for about £30 and spent the morning there before taking another bus to Lizard, which is the most southerly point in the UK. This bus was about £8. We stayed at the Youth Hostel Association hostel in Lizard and had a great experience. We went shopping in Lizard where we ate too much fudge, ice cream, and Cornish Cream Tea (this is a big deal—there is a massive debate if you put the jam or cream on first). Later, we went on a walk to Kynance Cove which would have taken about 45 minutes, but we stopped for so many pictures it took a bit longer. The views along the coastline here are spectacular. We spent a good deal of time in Kynance Cove exploring the numerous caves and walking along the sandy beach. When it started to rain a bit, we went up to the café that is right on the cliff and had some local crab. When it was finally time to head back to London, we took a bus to Redruth for about £4 and then took the Great Western Railway train back to Paddington Station. 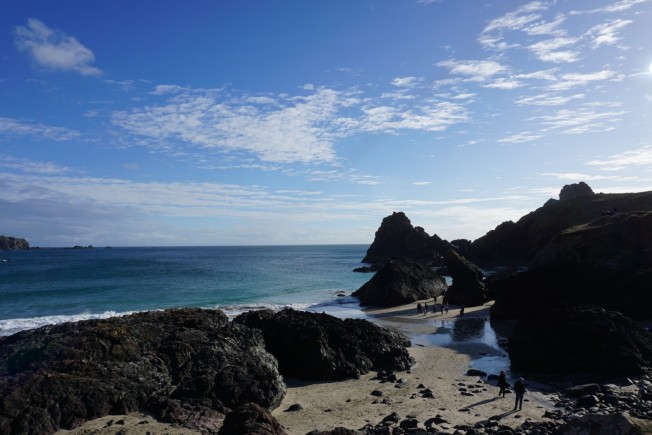 Another farther trip I took was to Aviemore, Scotland (pronounced Ah-vie-more). I took a train from London Kings Cross all the way to Aviemore that took about 7 hours (using my Britrail pass). I stayed at the Hostelling Scotland hostel in Aviemore which cost about £55 for three nights. While there, I ate my weight in haggis (yeah, they actually eat that there and it is surprisingly really good) and cookies from Asher’s Bakery. I went hiking by the trail right behind my hostel on Saturday morning and followed that up by doing a little shopping that afternoon. On Sunday, I went to Rothimurchus, an estate located in Indruie (about a 20-minute walk from Aviemore) that has been owned by the same family for 500 years. Crazy right?? While there, I went horseback riding on a highland pony named Finkle and went on a tour to see the farm’s Highland Cows (called Hairy Coos here). I spend £40 on these two excursions and had a great time. I also went on a hike to Loch an Eilein in the morning that was very pleasant.

These little tidbits of the UK I saw were absolutely incredible. Scotland has become one of my new favorite places and I cannot wait to go back again to see more of the beautiful mountains. In addition to these two trips, I have also taken a day trip to Windsor which was really easy. Before the semester is over, I am visiting Wales two times in addition to the Peak District in England. I urge you to explore this beautiful country as much as possible and learn about the rich culture here!