So, this past two week it has been amazing I was able to travel to Ireland and Turkey. I gained a lot of experience and knowledge from both countries. Each country is unique in its own way and I was amazed because both countries are rich in culture. Living in London there are people from many cultures which is something I really like, but many people tell me that I have to go outside of London to be able to appreciate their culture.Therefore, in the future, I’m planning to travel outside of London.

I chose to travel to Ireland because I don’t need a visa to get there, so a friend that lives in Paris called me and made me the offer. I have to admit that Ireland was never in my plans, but I can say it exceeded my expectations. Dubliners are very proud of their culture. They play their music is on every street, and I even saw some men wearing linen driving caps and their traditional long skirts! I enjoyed eating their traditional food because it was is very fresh and organic which reminded me of my home country. People are very happy and proud of their country. Every restaurant or pub I went they offer their traditional food and their famous beer called Guinness. I really appreciate that they are constantly practicing their traditions and sharing it with people from other places. I arrived in Dublin on Friday night, so  I had all Saturday explore the city. Dublin is a very small city and we did a lot in one day. In the morning we went to have breakfast in a traditional place and that was the first time I tried famous Irish coffee. Then, we went to the famous Guinness Storehouse. The storehouse explains the history of the beer through various exhibition areas including ingredients, brewing, transport, and advertising. The second day we woke up early and we went to the Cliffs of Moher. It was amazing! One of the most beautiful places I have ever seen. The view was great the only advice I can give if is that I would enjoy more going on summer because it was very cold.

One of my good friends is doing her master in Istanbul, so I thought it was a good idea to visit her. I bought my ticket a few weeks ago and everyone told me that I was crazy for traveling to Turkey because of all the negative things that had happened recently. I was hearing a lot of negatives comments at a point that I was thinking to cancel my trip. However, I talked with my friend and she told me that everyone was fine and that social media sometimes overexaggerates. The day of my trip I was very nervous because of all the bad comments I heard and I knew that Turkish culture is very different compared to British or Irish. It was a long trip because from London to Istanbul is a four-hour flight. I arrived in Istanbul and I was impressed that everyone knew English. That night we went out to get dinner and we went to a famous restaurant called Nusr_et (it is well known for this meat). The next day we took a flight to Cappadocia, a city in Turkey known for is air balloons. Unfortunately, we were not able to fly in the air balloons because there was too much fog and it was dangerous, but overall the city was beautiful because a day before it snowed. So, we were in Cappadocia one day and then we return to Istanbul. 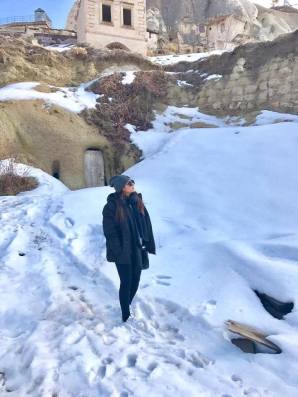 Istanbul is known for being an emerging city and a very cool fact is that it is located in both continents Asia and Europe. The majority of the people that live in Istanbul are Muslims, so if you are planning to come to this country is very important to respect their culture and beliefs. My friend took me to see the Blue Mosque and Aya Sophia which are famous mosques located in the historical part of the city. I was able to experience a religion that I don’t practice. I went inside of the Blue Mosque it was very beautiful and well organized. Muslims have traditions that are completely different from Catholics. For example, women have to be all covered inside the mosque, so the people that work in the mosque gave me something to cover my hair and body. The people were very nice and polite I think it is because they receive a lot of tourist from all over the world. Aya Sophia which is one of the famous mosques in Istanbul is well-recognized because many years ago it was a Catholic church, but it has now been converted into a mosque. Overall, Istanbul is a city that is very historic and cultural and I love that because I’m able to see with my own eyes historical events that I’ve learned in my history class back when I was in high school. Istanbul is a great place to visit, but I recommend you to go travel with someone that has been there before. I loved the food, culture, and people overall it was amazing!